Last weekend, I saw ‘The House I Live In,’ a documentary by Eugene Jarecki on the War on Drugs.  If you see any movie this year, see this one.

The obvious reason IHTD followers should check out this film is that we’ve spent over $1,000,000,000,000 (that’s a trillion dollars) fighting this endless, ineffective, and racist ‘War on Drugs’ since 1971.  Last year, the federal government alone spent over $25 billion enforcing the War on Drugs, and requested an increase in funds for FY2013.  That’s $25 billion that could go towards housing subsidies, towards college scholarship, towards keeping schools open.

‘The House I Live In’ is also a fantastic intro to understanding how mass incarceration has become ‘the New Jim Crow‘ in the U.S.  Black people make up over 60% of all who are incarcerated for drug offenses, despite the fact that drug use has been shown to be relatively equal among races, and Black Americans make up only 15% of the US population. 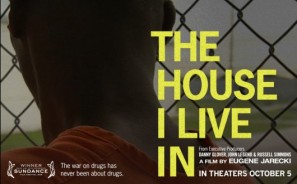 Author Michelle Alexander is featured throughout, and reveals the stark reality that there are more Black people imprisoned now than were enslaved in 1850.  The war on drugs has lead to the formation of a frightening new system of racialized control in the US.

While watching the film, I was moved by powerful images from inside, and gripping stories from prisoners and their families.  Walking out of the theatre, I couldn’t help but imagine where we could be today if all of those resources were spent on healing, rather than locking people up, separating families, and inflicting militarized violence on whole communities.  What if instead we focused on healing individuals, healing our communities, and healing society at large?

If I Had a Trillion Dollars is a film festival that aims to get young people to share their visionary ideas for how our federal resources could be better spent than on things like militarism and tax cuts for the wealthy.  Eugene Jarecki may not be 10-23 years old, and the 108 minute film definitely goes over our 3 minute limit, but I encourage you to see it nonetheless.  Heck, the Boston Globe thinks it’s your civic duty to watch it.

If I Had a Trillion Dollars I’d end the War on Drugs.

IHTD is brought to you by: